Spoiler alert…this love story has a sad ending. But it’s a true Burn Foundation love story from meeting at camp in 1993, hanging out and volunteering together at chapter events and ultimately running the camp they loved so much together. 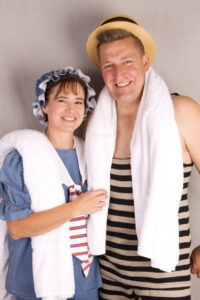 If you asked them, they’d each tell you ultimately it was the other who made the first move, and many former camp staff would tell you it was their orchestrations that made it happen. But both could trace an initial spark to the camp dance. Dave was dancing with a young camper who was delighting in kicking him in the shins, and she was dancing with buckaroo. In the midst of laughing their eyes met and at least from Dave’s perspective that was it. It was 1994 and the two would marry in 1996.  Several camp songs rang out at their wedding reception.

There was a kinda Yin/Yang with the two. She was an organizer, he was a writer and inventor. He had crazy, wilder creative ideas, she had carefully thought out ones.  He was more spontaneous, she was scheduled. He might bend a few rules, she carefully built structure. But both were about the kids always, and worked to learn all their names and tested each other (she was much better).  Evenings were spent brainstorming ideas for games, costumes, themes.  Their garage was partially camp storage, at one point 30 bins of costumes alone that required them to rent a trailer to bring to camp.

They brought their outside world knowledge, hers of the fire service and city organizations, his marketing and pr, to help shape the foundation.They served on the board in many capacities each, several times in some cases, to bring continuity and to insure even survival in the early days.   Together they were a repository of Burn Foundation trivia. 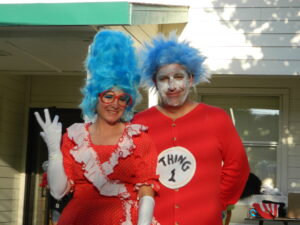 Their kids, Cassie and Emma grew up in a second family as vacations, mothers day, fathers day were often at camp. Though they benefited from the elaborate birthday parties their camp parents threw. They grew up blind to color, disability .. at one point their parent’s sought to brace them by telling them if they had questions about burns they could ask a unit leader at the time, Chatty, about her obvious burn scars.  Young Emma’s answer, “she’s not burned”. The lesson for the kids was over, but profound for the adults.  To this day they talk about counselors and campers as brothers and sisters, especially after Karen and Dave figured out that then Board President Rocks was young enough to be their actual son. 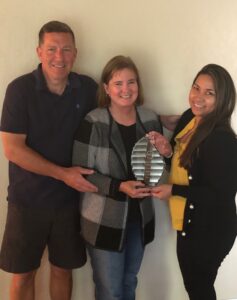 Shakes and Smiley attended camp together until 1997 when they took a few years break to have kids, returned in 2004 and continued to 2016 when as co directors they withdrew to spend some time with the girls before they left for college.   Despite leaving camp the family adopted sending birthday cards to the campers as a project to keep track of the names and kids and deliver some smiles.

Smiley was diagnosed with cancer in 2016 and fought valiantly for 4 years. Throughout when she could muster the energy she attended fundraisers and continued to provide information to the foundation. She put stamps on envelopes right up to the end and requested donations be made to the Foundation in her memory.

The outpouring of love from the Foundation was and continues to be strong and messages and visits came in from all over. “Thank you for being part of our family, for all the laughs, the creative outlet and the love through the years,” says Shakes. “Smiley was the best thing that ever happened to me, she taught us all so much.”

This website or its third-party tools process personal data. To find out more about how your information is used please read our Privacy Policy.
Reject AllAccept All
Manage consent