The 2022 Fundraising Award recipients are Pete and Kelly Dern! 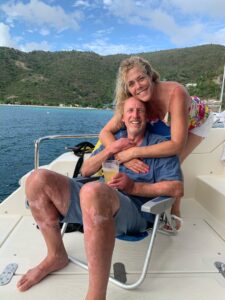 Pete “Cobra” and Kelly “Sunflower” Dern, have been volunteers for the Alisa Ann Ruch Burn Foundation for the past 7 years, following Pete’s burn injury. Pete was a Captain for the Fresno Fire Department for 25 years and Kelly enjoyed a 26-year teaching career. Not only was Kelly an amazing teacher, she is an incredible support to Pete now and during his recovery. Their whole lives have been dedicated to teaching, supporting and protecting others and each other. Over the years with AARBF, they have attended countless regional trips, provided peer support to burn survivors and caregivers, and, their favorite, participated in Champ Camp as counselors for the past 7 years!!

In addition to their support of AARBF survivors, they have shown their dedication to the foundation, as a whole, through their fundraising efforts. In 2021, they were able to rally community members, as well as friends and family to donate live, silent, and dessert auction items to AARBF’s Dinner & Dance. Because of their leadership and tenacity, the AARBF Dinner & Dance team was able to raise over $100,000 in just one night!

Thank you, Pete and Kelly Dern, we appreciate you!! 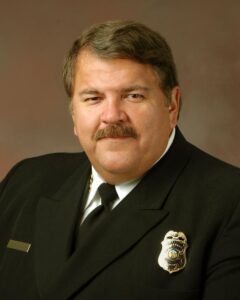 Ruben Grijalva has made prevention his life’s work! He is a former director of the California Department of Forestry and Fire Protection (CAL FIRE), which is responsible for protecting more than 31 million acres of the state’s privately owned wildlands and provides emergency services to 36 of the state’s 58 counties via contracts with local governments. Ruben is also a former California state fire marshal and state forester. Previously, he served as executive director of the California Fire and Rescue Training Authority, fire chief for the city of Palo Alto and fire marshal for the city of Sunnyvale. Currently, Ruben is the owner and principal consultant of FireChiefs.com, which provides a variety of consulting, government relations, strategic planning and code development services.

Ruben first became aware of AARBF through our Burn Relays, which he supported as a Fire Chief with the City of Palo Alto. Currently, he enjoys serving AARBF as a volunteer on both the Finance Committee and the Prevention Committee, as well as on our Council of Advisors. As a participant on the Prevention Committee, Ruben understands the importance of networking with fire agencies to expand the burn prevention educational reach of AARBF. Ruben has been able to sponsor informational booths for AARBF at the annual California Fire Chiefs Conference and the California Fire Prevention Institute to educate active firefighters, fire officers, and fire prevention personnel about the resources available to them from AARBF, and how they can help with our mission of burn prevention and supporting burn survivors. He considers it a personal mission to get more involvement from the fire service within AARBF!

Thank you, Ruben Grijalva, we appreciate you!!

The 2022 Survivor Services Award recipients are Chris and Heather Bridger! 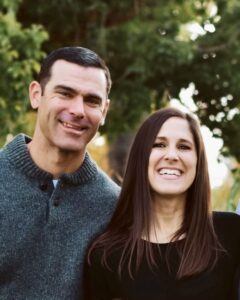 This dynamic duo spends countless hours each year planning Champ Camp. Last year, they planned in-person, virtual and hybrid options with a number of different scenarios to determine the best way to ensure a safe camp for our campers, counselors and staff. The end result was an in-person AND virtual Champ Camp for 92 in-person and 26 virtual campers!

Chris “Rocks” and Heather “Willow” Bridger were determined to make the 35th Champ Camp the BEST OF THE BEST and they succeeded! It looked a little different – with family pods, masks and social distancing – but the laughter, songs, costumes, fun and love were the same as the 34 Champ Camps before. The leadership, guidance, care, creativity and love that Chris and Heather poured into Champ Camp made returning safely to an in-person program a reality. And they’re doing it all again this year!!

When Chris was asked why he continues to give so much of himself and his family time to the foundation, he stated, “When I sit down and reevaluate my life, think about the stresses and things that keep all of us so busy, I always go back to where my heart is… that with AARBF and Champ Camp.”

Thank you, Chris and Heather, for all that you do to provide fun and safe programming for our youngest burn survivors! We appreciate you!! 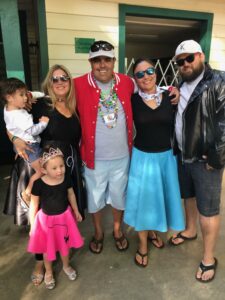 Rick worked for LA Country Fire for 17 years, where he was introduced to AARBF and started volunteering for Champ Camp in 1997.

Rick started as a Ranchero Counselor and then moved to be a Wrangler Counselor for over 20 years. In 2014, he became the Ranchero Unit Leader. He is known for teaching swim lessons, facilitating the counselor evening program activities, having his cabin dance to The Beach Boys, and somehow, always having his “birthday” at camp and going in the lake, even though his actual birthday is in December.

In 2005, Rick brought his then girlfriend Jennifer to camp, but didn’t tell anyone they were together. Rick loved joking with the other counselors encouraging them to ask Jennifer out. Until 2009, when Rick proposed to Jennifer just before camp started.

Jennifer’s Involvement began in 2005 as a Wrangler counselor and then after a few years, moved to senior cabins. After having her daughter, she took one year off and then came back to camp as the scheduler for two years, and then eventually becoming the co-senior unit leader. She is known for suppling the staff with her delicious coffee, her amazing staff shirts, and her famous spa nights with the senior girls.

In their past 20-30 years of involvement with AARBF, Rick and Jennifer have introduced over 25 new counselors to volunteer at champ camp!

After hurricane Katrina hit, Rick and Jennifer decided to double down and leave California and the fire service to focus on rebuilding the south. Despite moving out of California, not only have they continued to support AARBF and Champ Camp, but have become leaders and pillars in the community. Their impact on Champ Camp is significant and the lives they have touched through camp continues to grow.

We are so grateful and happy to announce Rick and Jennifer as this year’s 2022 Champy-On award winners! We appreciate you!!

Since he began volunteering with AARBF, Clark Stern has been a part of just about every event in Northern California. He’s been with us for holiday parties, ski trips, the Outdoor Trip, and Champ Camp as both a counselor and medical staff. Whatever it is, Clark is excited to be a part of it! If it will enhance the experience for the burn survivor, Clark will do it. From being the MC for a mean bingo game, making virtual events fun and hilarious, and even dressing up as a leprechaun at the ski trip so the kids could chase him, Clark is ready to go!

Clark is an all-around advocate for the foundation. He is a constant spokesperson versed on survivor services, burn prevention and fundraising endeavors. Clark has been a huge part of AARBF for years, giving countless hours to enhance the lives of burn survivors, prevent future burn injuries and expand the reach of these efforts by bringing new volunteers into the foundation. It’s no wonder that Clark was nominated and selected as this year’s People’s Choice Award winner! This award is a testament to not only what he does for the foundation, but also how great of a friend he is to everyone within our burn community. You Rock!

We once again present YOUR choice – Clark “Grizzy” Stern! We appreciate you!! 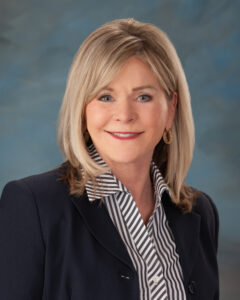 Dr. Ruth (as she is affectionately known) began her career of working with burn survivors at the Arizona Burn Center where she served as the Family Service Director and also as the Director of Psycho/Social/Prevention Research. It is through her research studies that she has applied what she has learned to help organizations, like AARBF, to develop or enhance programs for both survivors and their families.

Dr. Ruth started with attending Champ Camp in order to give campers a voice and to help determine the challenges faced by young burn survivors. Her research has been shared with burn care professionals on a national and international level. Dr. Ruth has also been involved with Young Adult Summit as an adult advisor for the past 12 years. Her company, Care Plans for Life, sponsors the Aiming Higher Scholarship for burn survivor graduate students. They also sponsored the pilot program for The Women’s Empowerment Program which she and Cindy Rutter, RN, LMFT initiated. Dr. Ruth has been honored to serve as a volunteer, helping the burn-injured become burn survivors, and we’ve been honored to have her be a part of the AARBF family for the past 20 years!

Thank you, Dr. Ruth, for all that you do to enhance the lives of burn survivors and help AARBF be the best we can be for our burn survivor community! We appreciate you!!

This website or its third-party tools process personal data. To find out more about how your information is used please read our Privacy Policy.
Reject AllAccept All
Manage consent